Two Essays on Colin Wilson: "World Rejection and Criminal Romantics" and "From the Outsider to Post-Tragic Man" by Gary Lachman 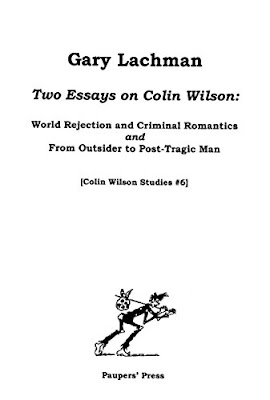 When your first encounter a book by Colin Wilson and begin to investigate what else he wrote, you can very quickly become intimidated by the number and scope of his works. After looking over his impressive body of work, you can find some recurring recurrent topics among the titles, but you’d have a long slog to find a common thread without a guide. In 2016, Gary Lachman published what I believe constitutes the definitive long-form (book length) guide to Wilson’s work, his biography of Wilson, Beyond the Robot: The Life and Work of Colin Wilson. But some might be intimidated by a book-length dive into Wilson. So, is there a work that allows one to dip one’s toe into the water, so to speak? In this case, I can recommend Lachman’s Two Essays on Colin Wilson: “World Rejection and Criminal Romantics” and “From Outsider to Post-Tragic Man.” The two essays date from 1994, thus pre-dating the end of Wilson’s career (as a writer he was truly prolific), but they still capture the essence of Wilson’s project.

The first essay plunges the reader into Wilson’s ideas about optimists and pessimists and how they arrive at their respective positions. The pessimistic view (‘world rejection’) gained the upper hand with the advent of the Romantic movement, and it has continued to maintain its prominence, especially in the artistic class. Of course, Wilson and Lachman can identify vital counter-examples (e.g., Nietzsche (his dourness and occasional vitriol notwithstanding), William James, and George Bernard Shaw), but many writers and artists in the 20th century tended toward ‘world rejection.' After discussing various viewpoints, Lachman makes the following point (referring to Dostoyevsky’s Brothers Karamazov)

The whole point of Wilson’s The Outsider [Wilson’s first book and the one that brought him widespread acclaim-sng] and practically all of his subsequent books is that any halfway sensitive consciousness is faced with this dilemma: which vision is true, Alyosha’s or Ivan’s? In a way it comes down to a variation on Pascal’s wager: if the universe is pointless and worth rejecting, then to act as if it isn’t, as if it is meaningful and worth affirming, is a mistake with no worse consequence than any action or belief in a meaningless universe. But to act as if it is meaningless and worth rejecting when it is indeed meaningful and worth affirming is to throw away the possibility of having the kind of experience that Alyosha does when he feels that his consciousness is linked to the stars, or Nietzsche when he felt “6,000 feet above man and time,” or the Steppenwolf’s vision of “Mozart and the stars,” and the other visions of meaning and affirmation that Wilson has catalogued throughout his enormous body of work.
The thing to be remembered is that the affirmative vision is not the outcome of a reasoned argument, although after it one can use reason to remind oneself of its reality. The affirmative vision always arrives unexpectedly, from some source in ourselves deeper than our conscious egos.

Throughout the remainder of the essay, Lachman continues to explicate on this fundamental theme, just as Wilson did throughout his lengthy career. Both Wilson and Lachman embrace the view that life is worth living and counter the arguments of the world rejecters, although both Wilson and Lachman eschew Pollyannaish views on the subject. It’s not that evil and suffering don’t exist, it’s that these realities don’t carry the day.

One of Wilson’s key insights is that one overcomes the abundant prompts toward pessimism by “peak experiences” (Maslow’s term; Wilson was an admirer, then friend and biographer of Maslow). Of course, the Romantics (the originals and their descendants) craved peak experiences and sought them, often by drugs and alcohol, but Maslow and Wilson both believed that peak experiences were not “gifts of the gods,” but how ordinary consciousness should work. Indeed, the “criminal” part of the essay, reflecting a part of Wilson’s investigation, is the fact that at least some criminal behavior is sparked by the need for thrill and adventure, as well as power. While greed and simple lack of self-control (e.g., alcohol consumption) are behind most crimes according to my 30 years of experience as a criminal defense lawyer, in some cases, the motive seems to have been the thrill of it all. (Two check-kiters (back in the day) pop into my mind; they loved to tell how played the game so well—for a while.) Wilson cites many instances of either actual and imagined debauchery pursued by artists to heighten and engage consciousness to the level of a peak experience. But whatever temporary high they achieve then dissolves and becomes merely an elusive vision of a paradise lost. Some writers, like “William Burroughs, Henry Miller, Jack Kerouac and Norman Mailer” almost deify the criminal and debauched elements in their writings, as against, for instance, Shaw, who created characters who sought out the extraordinary and to achieve and aspire greatly. (Again, my 30 years of experience with “criminals” prevents me from giving any credence to romanticizing them; the overwhelming number of them were simply occasional screw-ups; some wise-guy blow-hards with a bit of luck; and the congenitally anti-social. I never mustered any admiration for my clients, although I hasten to add that I always treated them with dignity and respect.) Thus, Wilson-Lachman (it is hard to separate the thinking of the two within the context of these essays) don’t have to work very hard to convince me of the folly of the romancing the criminal, or of ‘world rejection’ in general. Yet, because these authors are still read and perhaps have some following (beyond English departments?), the exercise is a worthwhile one.

So, while some of the essay critiques the futile (and to me, frankly boring) worldviews espoused by the pessimists, the other part looks at the problem from the affirmative perspective. Lachman notes:

While the Criminal Romantics treat the symptoms of what Wilson calls ‘life-failure’ by throwing themselves into one adventure after another, Wilson addresses the source of the problem.
That source, ultimately, is consciousness itself. Two things, Wilson argues, are essential in understanding the problem of ‘affirmation consciousness’; one is the curious relation between the conscious and unconscious minds, the other is recognizing the fact that we are all in a state of what he calls ‘upside-downness’. Since Sigmund Freud’s ‘discovery’ of the unconscious, the popular notion has been that the conscious mind is in a sub-ordinate relation to the unconscious. We are all, the common myth goes, driven by unconscious forces. There is a one-way relationship between the two; in computer-talk, the unconscious ‘downloads’ into the conscious mind, but not vice versa. With Freud this scenario is exceedingly dark, since for him the unconscious is a kind of cellar full of nasty business we’d rather not think about. In Jung the situation is better; for him the unconscious is not a dumping ground for ‘repressions’ but a creative, purposeful centre in the psyche. But still, in Jungian psychology, the unconscious calls the shots.

Wilson posits that the opposite may be the case: that the active, conscious mind may affect the unconscious to our benefit. In other words, our conscious, intentional acts—our active mind—may be the vehicle of our well-being and not a passive, “leave-it-to-the-unconscious” attitude that depth psychology (Freud and Jung) suggests. It’s certainly more than just “think happy thoughts,” but does begin with “don’t focus on negative thoughts.” Some balance, some lines of communication, between the conscious and unconscious mind must be opened, and Wilson suggests (and Lachman agrees) that the conscious mind can have a much greater role in promoting this increased communication that all too many have heretofore believed.

In the second essay, “From Outsider to Post-Tragic Man: Colin Wilson and the Case for Optimism” many of the same themes are further explored and developed. As Lachman explains in the opening paragraph:

Colin Wilson is a very good example of what Isaiah Berlin called a hedgehog, he who “knows one big thing.” Whether he is writing about the Düsseldorf sex murderer Peter Kürten or the Russian mystic G. I. Gurdjieff, Wilson’s subject is invariably the same, and has been so since his first book, The Outsider. For nearly forty years Wilson has been fascinated with the potentials of human consciousness and has produced under this rubric a massive and highly readable oeuvre on topics as diverse as existential philosophy, the occult, crime and the psychology of murder, literary criticism and sociology. In pursuit of his investigations, biographies of such dissimilar characters as Bernard Shaw, Wilhelm Reich and Grigory Rasputin have emerged from his pen, as well as many novels and much incidental writing. His output is unquestionably prodigious: at last reckoning the number of volumes from Wilson’s hand exceeds 100.

Lachman’s opening comment that Wilson is a “hedgehog” according to Isaiah Berlin's distinction between thinkers as hedgehogs and foxes is a designation that wouldn’t on first blush attribute to Wilson, as I alluded in the opening of my review. His array of book topics, non-fiction and fiction, is astonishing, but Lachman is right: an overriding theme ties all of Wilson’s work together. Wilson is all about the potentials of human consciousness. As Lachman aptly puts it: “[W]hat is the “one big thing?” Put as briefly as possible, Wilson’s underlying theme is that questions of the meaning of human existence cannot be satisfactorily addressed without taking into account the intensity—or lack thereof—of human consciousness.” Id. 743-745. If like me, you perceive everything that we humans do as motivated by a desire to alter or sustain a particular state of consciousness, then you realize that Wilson must be right. Feeling sleepy? Then change to sleep consciousness (which has various levels as well). Hungry? Act to alleviate that uncomfortable state by eating. Bored? Turn on the television or attend to your smartphone (which may well lead to greater boredom, but it may distract you for a while. Horny? Well, you get the idea. Of course, my examples focus on basic needs and drives, but we can say the same about the need to create, to be inspired, to share emotions with a group, to feel the body in action, and so on. We constantly act to alter our state of consciousness. But not all courses of action are useful, and some are counter-productive to our (often ill-defined) intentions. I think that this is what Wilson (and Lachman) are getting at.

In the remainder of the essay, Lachman catalogs the developments of Wilson’s thought through his Outsider cycle (five books at the beginning of Wilson’s career). By the time he’d completed these books, Wilson had developed an alternative take on the existentialism of Sartre and Camus. A positive existentialism, if you will, is outlined in Wilson’s An Introduction to the New Existentialism (1966). In this work, Wilson pens his answer to Sartre, Camus, and others in their line of thinking. Husserl’s phenomenology and its emphasis on intentionality and Whitehead’s distinction between ‘causal efficacy’ and ‘presentational immediacy,’ are the main ingredients with which Wilson brews his ‘new existentialism.’

Lachman continues his explication to include the “St. Neot margin” (a peculiar phrase but based on a terrifically telling story told by Wilson that brings it alive), ‘life failure,’ ‘the robot,’ and ‘Faculty X.’ Each of these terms expands and clarifies Wilson’s essential insights. In fact, my notes and highlights go on at some length in the book from this point, but I’ll stop here because for the few dollars it will cost you to buy this and read it on your Kindle (or free Kindle software), you should. Just writing the review makes me want to go back and read the two essays again cover-to-cover. The team of Wilson and Lachman is a potent one and one that you can return to repeatedly for inspiration and insight. To me, this is high praise indeed.