Lost Knowledge of the Imagination by Gary Lachman 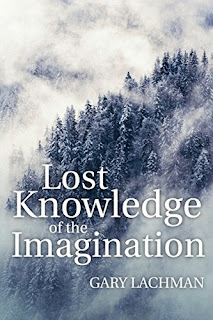 Let me begin my review by sharing some thoughts that I held about imagination before first reading this book.

Imagination is one of those terms, such as freedom or love, that we can’t conclusively define, but which we can’t do without. Imagination, however, seems to have fallen out of favor in comparison to the more widely used contemporary term, “creativity.” Creativity, however, strikes me a much shallower concept. To my mind, creativity denotes more of a surface ingenuity, a clever retelling or reworking of existing schemes, structures, or stories. A typical example of this sense of creativity comes from contemporary public art, which often runs from the whimsical or merely clever (in the American sense) to the disjointed, if not merely dull or ugly. Imagination, on the other hand, exists at a deeper—one might even say archetypal—level. By going deeper, below the surface, it goes beyond the common human trait of reworking the surface of things by recognizing the deep structures of reality and how they may be contemplated and explored. It is from within the depths of the human mind that imagination springs. Thus, my sense of the distinction between creativity and imagination and where I find much of our contemporary infatuation with creativity misses the mark. In times of trouble, in which we certainly live, we need to move beyond creativity into the deep wellsprings of imagination.

It was with the frame of mind described above that I eagerly dove into Gary Lachman’s Lost Knowledge of the Imagination. As I’ve come to expect from Lachman’s books, he’s gone before me to explore and give voice to thoughts that I often held as no more than intuitions. And when someone says something that you’re inclined to think in any event (and if you can overcome the envy in realizes the other’s superior talent and effort), you quickly are taken in by a book or argument, as I was with this book. Lachman entitles his opening chapter “A Different Way of Knowing,” and he had me there. Lachman explores the profound shift in ways of knowing that came to fruition in the Scientific Revolution of the 17th-century with its emphasis on empirical observations and mathematical-logical thinking that emphasized the role of quantity. This, Lachman writes, was not a slow shift, but a sharp break with tradition, although essential thinkers of the era, such as Pascal, realized that this new method was an addition to older ways of thinking, not a full replacement. Lachman quotes Jacques Barzun (referencing Pascal): “the spirit of geometry ‘works with exact definitions and abstractions in science or mathematics’, while the spirit of finesse ‘works with ideas and perceptions not capable of exact definition’”. Lachman, Gary. Lost Knowledge of the Imagination. Floris Books. Kindle Edition. But not all of Pascal’s contemporaries, nor Barzun’s in our own time, appreciate and realize this distinction. Lachman goes on to explain some of the ramifications of failing to appreciate this distinction:

“The drawback here is that because the lack of definition is rooted in its subjects themselves, and not due to insufficient information or ‘facts’ about them – when will we have all the facts about love or freedom? – those who follow the spirit of finesse find it difficult, if not impossible, to explain how they know what they know. There are no steps 1, 2, and 3; it just hits them and it is obvious, self-evident. We hear a sonata by Beethoven and we know it is beautiful and meaningful; we do not arrive at this knowledge through a series of logical steps. We do not say to ourselves, ‘Well, it has x number of notes in this passage, which means that …’ and so on. But if asked how we know it is beautiful and meaningful, and even worse, if we can prove it, we draw a blank. The spirit of geometry can take us by the hand and lead us from definition, theorem, and axiom to the goal. But the process is mechanical, practically tautological, as each definition is merely another way of stating the same thing (4 is only another way of saying 2 + 2). And it works best with practical, utilitarian things, not with those that have a purchase on our emotional being.” Id.

Lachman goes on to discuss others who’ve arrived at very similar insights, from the 20th-century German thinker Ernest Junger to Michael Polanyi, Alfred North Whitehead, and the contemporary literary scholar-turned-neuroscientist, Iain McGilchrist. These thinkers—and many others—have described and appreciated the distinctions between these different modes of thought, while much of the broader culture clings to a simplistic emphasis on the abstractness (and resulting barrenness) of the "scientific method.” To be clear, Lachman isn’t rejecting the scientific method or the value of science, only “scientism,” which recognizes the abstractions and conclusions of natural science as the only means of knowledge and arriving at “truth.” From this foundation in the history of Western thought, Lachman proceeds to establish the value of the ways of knowing that have been mostly (although not entirely) lost. He describes his project:

“This book is about this ‘lost’ knowledge of the imagination. Yet, while this may give us a handy phrase under which we can put examples of the other kind of knowing I have been speaking about, it is not immediately clear what we mean by ‘imagination’. Imagination is one of those things which we all know intimately but which we would find difficult to pin down exactly. It is one of those things that, as Whitehead said, are ‘incapable of analysis in terms of factors more far-reaching than themselves’. . .. Memory, self-consciousness, thought, perception: all inform and are informed by imagination and are difficult, if not impossible, to pry apart from it or each other. This should not be surprising. Imagination does not follow the clear axioms and definitions of the spirit of geometry, but the wayward, vague, surprising insights of the spirit of finesse.” Id.

Lachman, having set the terms of his project, moves on to explore a variety of thinkers who have developed and explored insights into this different way of knowing.  For instance, he explores the towering figure of the German Enlightenment and Romanticism, Goethe, and the (underappreciated) 20th-century British thinker, Owen Barfield. And, I must add, Samuel Taylor Coleridge, about whom Barfield wrote a book-length study. I must pause here because of what I wrote about at the opening of this review about my distinction between “creativity” and “imagination.” As is inevitably the case, someone arrived at 'my' keen insight long before I did—in this case, no mean figure: Samuel Taylor Coleridge. Lachman writes, “[T]he distinction that the poet Samuel Taylor Coleridge made between fantasy and imagination, with fantasy doing collage work, and imagination creating something that is truly ‘new’. For Coleridge a unicorn or a flying pig is a product of fantasy, of putting together different bits and pieces of our snapshots. True imagination is something else.” Id. Like I said.

Lachman goes more deeply into Coleridge’s perspective by tying his insight with that of Goethe’s work on plants and Goethe’s imaginative insight about what the first plants must have looked like:

The non-existing plants that Goethe could hypothetically create would not be monsters in the original sense of the word – aberrations of nature – but in perfect keeping with Nature’s designs. This is because Goethe had matched the ‘unknown law’ in the outer world, Nature, with the ‘unknown law’ in his inner one, his imagination. As I mentioned, these ‘unknown laws’ are what Coleridge called ‘facts of mind’, necessities of the imagination, that must be met in order for it to be something more than a ‘madman’s cornerstone’. Failing this, imagination sinks to being merely what Coleridge called ‘fancy’, which is nothing more than ‘a mode of Memory’, a way of re-arranging elements obtained through the senses (‘flying pigs’), which is all the ‘blank slate’ school of psychology will allow us. Or worse, it becomes a distortion of reality, Paracelsus’s ‘madman’s cornerstone’ or the kinds of images being produced by much of modern art that Barfield found indicative of a spiritual bankruptcy and which, with something like Yeats’ warning in mind, he feared could eventually produce a ‘fantastically hideous world’. Id.

Do we live in a “fantastically hideous world”? As, no doubt, the world has always been, it’s a mixed lot. But much of what passes for imagination today we can more accurately describe as (at its best) mere creativity or fancy, and at its worst, a nightmarish parody of reality, where fake and real become interchangeable and indistinct. Lachman discusses (and greatly appreciates) the work of the 20th-century British poet and essayist Kathleen Raine, and in exploring her work in “the Tradition.” He writes

Decades before its popularity, Raine predicted the rise of ‘reality TV’, pointing out that what is on the screen is often no different from the lives of those watching it. ‘Viewers and viewed’, she observed, ‘could change places and nothing would be altered’. If a work of imagination had once been a ‘magic glass in which we discover that nature to which actuality is barely an approximation’, it had become in our time a kind of brightly lit bathroom mirror, in which all the blemishes and wrinkles of ‘real life’ were magnified a hundredfold. Id.

I can only add that in the U.S., in the era of the reality-TV president, we need more from our imaginations that ever.

I haven’t addressed many other themes and thinkers explored in this wonderful work. “Imagination” is one of those significant terms that one could explore almost endlessly (and I hope to explore the topic further). There are many works and thinkers to reference in such a project. But it’s hard to—imagine?—a better book with which to begin such a quest. In fact, there is so much that Lachman covers in this (relatively) short work that I’ve not mentioned that I feel guilty leaving so much out, but the best way to alleviate my shortcoming (my guilt is my own stuff) is the read this outstanding work.

A Brief Postscript:
I read this book immediately on its release in October 2017, but because of some other demands on my time I set aside writing a review and didn’t get back to it when it was fresh enough in my mind to attempt to do it some justice. Just don’t let the tardiness of my review belie my enthusiasm for it. (My tardiness did provide me a good excuse for a complete second reading.)  Also, I blame Lachman himself (facetiously) for my delay in writing this review because he referenced a review on his blog that was comprehensive and excellent. When I read that review (here), I knew I couldn’t improve upon it. But now with more time and an understanding that writing this review (as with most) was impelled by my need to edify myself as much as by my hope to edify others. So, I throw it out there.